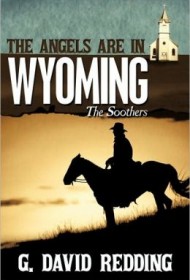 The Angels are in Wyoming: The Soothers, is a simply told story aimed at fans of Christian romance.

Grigsby, Wyoming, in 1891 is a small, peaceful town. Pious, churchgoing Virginia White has done her best to raise her daughter Dorothy by herself ever since bank robbers killed her husband. She keeps busy and earns a living by running the town’s café and hotel.

One day a new man arrives in town: Jack Samson. His arrival is anything but quiet as his first act that garners much attention is to break up a bar fight by perfectly aiming a shot between two rivals. When he decides to stay awhile, he crosses paths with the beautiful Virginia.

Though Jack is outwardly rough and adamantly refuses to attend church, little Dorothy is the first one to see that perhaps Jack has a tender side after all. Eventually, even Virginia succumbs to his charms, but, being opposites in so many ways, they struggle to make a relationship work. And when Jack reveals secrets from his past, it takes the love of an entire town to help this couple through.

Author G. David Redding does a nice job with the setting—the saloon, the remoteness, and a small group of believers who hold considerable influence over the town. What is immediately apparent in the storytelling, however, is how the author insists on telling rather than showing the action. “Jack altered his disposition” and “the man started to look sad” are just two of countless examples. Misspelled words such as “Appomatax” (Appomattox) and “astonied” (astonished) are further evidence that this book is in need of a careful editor.

This is an extremely simple story where everything wraps up neatly. It would perhaps find an audience among very conservative Christians, provided they can overlook the issues mentioned.