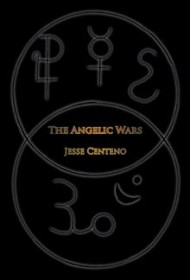 In The Angelic Wars, angels, demons and ministers of grace clash in a bleak story of war between Heaven and Hell, with Earth hanging in the balance.

The Angelic Wars opens on the biblical story of Creation, with some twists thrown in for good measure. Heavenly hosts recruit Lorenzo Alexander for a very special mission: “It’s a spiritual war, Lorenzo. You have been trained to fight demons, save souls, and you will have us at your side to battle the anti-Christ,” he is told by his angelic champions. Numerous important pronouncements follow about the state of the world, some not-so-benevolent in tone. “Whatever happened to the words of the Bible that says man shall have power over woman? Has man rewritten the Bible?” author Jesse Centeno muses through his narrator.

After Lorenzo is murdered by an agent of Satan, the story oscillates between characters to a fault. Dozens of characters (Jetson, Mo-Billy, Fotley, Mitsy, Helcat, Mary Rose, Oune, Bane, etc.) fill out an overflowing cast of politicians, angelic cadets, assassins and satanic majesties that have no purpose other than to pop up and spout a few lines about how Mr. Lived, the anti-Christ, is winning. Mankind is given the mark of The Beast by The Government. Motley crews of characters from both sides of the good/evil spectrum seek out weapons, such as the mythical Seven Seals from The Book of Revelation, The Book of Life, and The Book of Demonology.

Centeno, a published poet (Moontime Stories, etc.) does his best to tap into the rich vein of books exemplified by Danielle Trussoni’s Angelology, but narrative disarray and other flaws push this ambitious religious thriller to the periphery. Too many single-purpose characters, a tornado of disorderly changing narrative modes and numerous grammatical errors (we often meet “angles” instead of “angels”) simply spoil the goods.