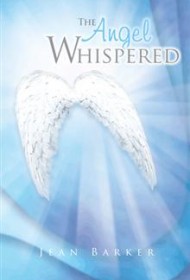 Jean Barker’s sincere memoir describes her many struggles in life, balanced with the comfort and peace she found through her connections with angels. Born in Conisbrough in the county of South Yorkshire, Jean recalls having visions of Mary and hearing voices from an early age. She would get premonitions of impending doom, including that of her father’s death, as well as troubling visions of strangers who’d also had disturbing deaths.

After being hit by a car on her motorbike, Barker says she had a “wondrous vision” of an angel who told her it was not her time, and that it was her job to share her gift and teach others about angels. After her recovery, the author devoted the following 10 years to learning all she could about spirit guides and how to connect with them, enhanced by studies in angelology and theology.

Barker continued her life struggles with the death of her 18-month-old son, the births of two premature girls, an unfaithful and unreliable husband, her many bouts with cancer and the later tragic death of her daughter. Through it all, she relied on her angels to give her strength, guidance and peace.

Barker’s memoir jumps back and forth from chapter to chapter, sometimes offering detailed explanations of angels, their heavenly hierarchy and their connection to the seasons, colors and even zodiac signs. (She describes an angel as a “genderless being of a vibration that is pure spirit.”) Other times, the chapters move her personal life story along from trauma to trauma. While Barker presents the information candidly, the book’s flow stutters from the frequent misuse of punctuation and spelling errors. She also fails to give credit for some of her information that clearly comes from outside sources.

Even so, Barker’s memoir is heartfelt. Despite its random structure and other flaws, it may appeal to like-minded people with strong spirituality and perhaps similar experiences.