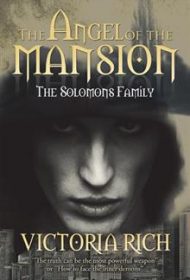 Victoria Rich’s novel about a young woman’s descent into a world of bizarre ritual and dark enlightenment offers a stylish fusion of supernatural mysticism, horror, mystery, and romance.

Anis is a stunningly beautiful 18-year-old fashion model residing in Manhattan. She seems to be living a charmed life, but after she is brutally attacked on a New York City street, she struggles to put the pieces of her life back together. Many of her model friends abandon her, but Michael Solomon, a handsome older man from a family of affluent bankers, stays by her side and is influential in her physical and emotional recovery.

The attraction between the young woman and the mysterious man is undeniable, and Solomon eventually asks Anis to marry him. But the premarital contract that she signs is filled with strange stipulations, and Anis soon finds herself imprisoned in a “golden cage,” alone in a mansion and part of an aristocratic family that revolves around bloody rituals and arcane knowledge. As she fights to somehow regain her freedom, she also begins a dangerous journey of self-discovery in which she begins to understand her place—and singular power—in the world.

But while the narrative is certainly readable, the work has several flaws. The novel feels bloated and unwieldy—skilled editing would have made the storyline tighter and more focused—and because of this, the pacing suffers and the tension all but disappears.
The biggest issue, however, is with the unappealing characters of Anis and Solomon. The narrative is filled with their fights and incessant bickering, reflecting poorly on both. With characters such as these that are not identifiable or redeemable in some way, the reading experience quickly becomes detached and emotionless.

Ultimately, The Angel of the Mansion offers a promising premise but is hampered by a convoluted storyline and selfish and unsympathetic characters.