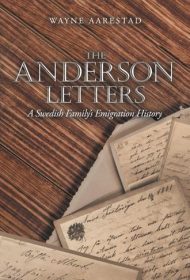 During the late 1800s, Wayne Aarestad’s ancestors immigrated to America along with more than a million other Swedes seeking land and economic opportunity. This book is his compilation of letters the Andersons wrote amongst themselves as they migrated and settled, mostly in the Dakota Territory. They detail poverty and hardships the family overcame with flinty determination and perseverance.

The first to arrive in America was Albert, the oldest son of Anders Per and Lisa Johanna. Working odd jobs, sometimes for only a dollar a day, Albert gradually earned enough money to send for a brother, and then another brother. Finally, the whole family, save for one married sister, made it to America. They established homesteads and supported them by building roads and railroads, farming and working as domestics (Albert’s sister worked for families before she married).

Their letters reflect their poverty. “I am wondering if you could lend me $10,” writes Albert’s uncle in one of the many pleas family members sent one another. They describe harsh weather (“Here heavy rains continue to ruin crops and houses. Storms have wrecked houses even in the woods”) and daily diet (“Dinner: coffee, bread, butter, syrup, fish, pork or herring, lots of potatoes, sauce or cake”). Births and deaths are noted, and courtships (some precarious) are tracked. “It is not easy to respond immediately to such an important letter,” writes one woman to Albert, “especially since we did not care that much for each other in the past.”

The letters provide a rare opportunity to lean into and regard the past from a front row seat. The only flaw is spotty commentary from the editor. Although he explains some things, such as how “agricultural finances…were all new farming realities” to these emigrants, he overlooks others, like the oft mentioned “self-binder” or the demographic composition of the Dakota Territory.

Nonetheless, readers will find this a fascinating glimpse into the past, told through the eyes of those who lived it.