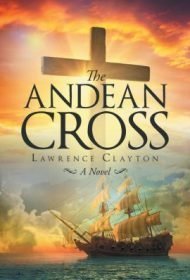 Part thriller, part historical and religious mystery, The Andean Cross tells the story of historian Matthew Western and anthropologist Clair Snowden as they find love and danger in a trans-continental adventure.

The novel opens in 1544 with a scene surrounding the investigation into a shipwreck in the Bay of Panama. A precious religious artifact was on board and is missing. From this prologue, the modern-day story begins. A group of divers, academics and Panamanian locals, which includes protagonists Matthew and Clair, search for the wreck, unaware that nearby lurks another boat whose occupants intend to steal any treasure that may be found. As the story evolves, characters rush to track the artifact, dubbed the Andean Cross, and Matthew and Clair become romantically involved.

Clayton offers vibrant descriptions of street scenes from New York City and New Orleans, to Madrid, Lima and more. He also displays a breadth of knowledge of academia, anthropology, South American politics and corruption, to name a few topics.

But the novel suffers from significant flaws. It includes a large cast of characters and multiple points of view, head-hopping between different characters’ thoughts, which becomes confusing. Additionally, the author dwells on lesser characters’ thoughts and backstories, slowing momentum and impeding the central characters’ ability to develop and grow.

Transitions between scenes are equally confusing. In early chapters, Clayton uses bold headings such as “Later that Afternoon” or “Three Weeks Later,” which, although disruptive, make some sense. But later, this becomes “Scene Shift,” “Change Scene,” and “Shift Scenes,” giving the impression of an early draft, rather than a finished novel.

Finally, there are numerous grammatical and typographical errors, including inconsistent use of dialogue conventions, making direct speech hard to read.

The Andean Cross has a potentially interesting plot and some well-crafted scenes, but with its numerous characters and technical issues, the story is extremely hard to follow and requires greater polish.