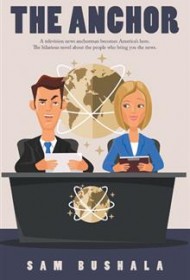 In this amusing satirical novel, author Sam Bushala skewers the television news industry for its outlandish focus on news as entertainment, all in the name of ratings.

Anchorman Larry Lincoln has a precarious hold on his job at the cable news station, YOURchannel, partly because of his thinning hair. When he leaves town to pursue a promising story—an exclusive interview with a Mafia don in Monte Castella, Sicily—YOURchannel brings in Pearl Necklace, a sexy centerfold as his replacement. Ratings soar as Pearl Necklace enters the set on a swing and invites readers to vote on her choice of outfits.

Meanwhile, it’s soon apparent that the interview in Sicily is a publicity stunt planned by the impoverished town to gain some attention. Before Larry can even meet the “Don” (the town’s cobbler), he’s kidnapped by three buffoonish townsmen, hoping to make a quick score. YOURchannel executives stall the kidnappers so that they can spin Larry’s kidnapping into ratings gold with a nightly segment called “Hero Held Hostage.”

Bushala’s book is silly-fun in a good way, with running gags about Larry’s hair; kidnappers who spout lines from American crime movies and slap each other like The Three Stooges; and a savvy Mayor of Monte Castella who uses every opportunity to promote his town during the kidnapping. Larry’s popularity skyrockets as YOURchannel bilks the ratings by letting viewers interview the hostage in captivity, with one person even suggesting he should take a selfie with the kidnappers. When Larry replies, “They took my phone;” the caller responds, “Oh, Larry, how could they do that?”

With its broad humor and outrageous situations, the book won’t be everyone’s cup of tea. But for readers who shake their heads at the stories that pass as news these days, the book will entertain while driving home the point that we’re a long way from the days when news anchors didn’t have to make the news to be a part of it.