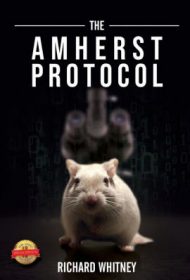 Richard Whitney’s The Amherst Protocol is a gripping intercontinental conspiracy thriller blended with science fiction and set in the not-so-distant future.

Reporter Clay Tucker and his Dallas Observer colleagues are preparing to cover the ten-year anniversary of the first successful cloned heart transplant. In search of background to pad their story, Clay travels to South Africa, and while fishing for material on the world’s first-ever successful heart transplant, performed in 1967 by Christiaan Barnard, he stumbles upon the involvement of a company called Pontiac Pharmaceuticals, which reputedly funded research related to the procedure. Subsequently, it becomes apparent that Pontiac subsidized the first cloned heart transplant, too.

Soon, curiosity reveals Pontiac to be a subsidiary of the arms-dealing shadow corporation Omega Security Systems, which is clearly up to no good. It isn’t long before Clay and fellow reporter Brian Singh find themselves hip deep in a perilous morass of corporate villainy, unethical science, military coercion and political subterfuge as they race against the clock to expose Pontiac’s corruption.

The Amherst Protocol is both an engaging, illuminating science fiction mystery, and a wonderfully paced international conspiracy thriller, packed with suspense. Taking its cues from paranoid staples of the 1970’s such as The Parallax View, Robert Ludlum’s pop-conspiracy narratives, and the crusading post-Watergate reportage of All the President’s Men, the novel is an exemplary exercise in escalating investigative tension. Packed with disturbing reveals, impeccably researched science, futuristic paraphernalia, and shocking incidents, there’s rarely a moment when the plot stands still.

If it has a flaw, it’s that, at times, abstruse medical jargon can leave readers feeling overwhelmed. Nonetheless, the detailed precision of Whitney’s prose, his veritable stream of authentically rendered dialogue, and the story’s finely drawn protagonists more than compensate.

Thriller and science fiction fans alike will find plenty to keep them entertained in The Amherst Protocol, which confidently weaves its intricate web of corporate, scientific, and military intrigue into an informative and exciting whole.