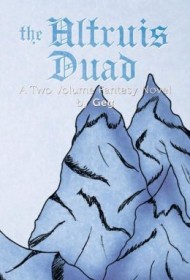 Taking place in a typical fantasy world and featuring the common theme of good vs. evil, The Altruis Duad is a conventional adventure fantasy through and through. What sets it apart is its adept storytelling and brisk pacing.

The excitement all over the realm of Sperratraze is palpable: The 20th anniversary of the end of the Year-Long War is quickly approaching and preparations are underway for an epic celebration commemorating the defeat of the Edac (subterranean monstrosities that have psychic abilities) and their nightmare-inducing minions through the divine intervention of Yarshilla, a goddess whose followers believe that love ultimately conquers all. But Seblar Gray, Lord of Castle Altruis, and the people of Sperratraze have no idea what is about to befall them. Not only are the Edac back and preparing to attack en masse, but the realm is being invaded by a foreign army as well. And to make matters worse, a group of conspirators who call themselves Reave’s Coterie are plotting to overthrow Gray and his regime.

Chronicling two chaotic weeks for the people of Sperratraze, the action in this novel is fast and furious, following a handful of heroic characters who battle the invaders on various fronts. While most characters have little depth, the story includes some memorable players, such as Azal, Gray’s daughter who is a military leader and can also wield the magical Word (of Yarshilla); and Gorth, a morally ambiguous soldier who has the potential to be a legendary hero of the realm — or its biggest traitor.

The story features superficially described characters, simplistic themes, and numerous grammatical errors throughout. But these are all but forgotten by an immersive and highly entertaining narrative. A knotty storyline filled with action and adventure—and some impressive bombshell plot twists—make this a surprisingly satisfying read.