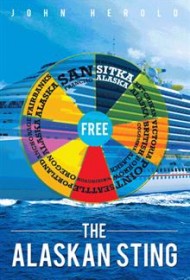 In John Herold’s new novel, The Alaskan Sting, Tom Courier’s cousin, Scott, a top performer at the aerospace company where they both work, has been rewarded with a 10-day Alaskan cruise. When Scott arranges for Tom to take his place on the trip, Tom is unprepared for the misadventures that befall him.

First, his plane to the cruise ship is felled by an explosion, stranding him in Washington state. This delay is not without an upside, as Mandy Jones, a local politician he met on the flight, spirits him away for a sexual rendezvous. Arriving in British Columbia and hoping to catch up with his ship there, Tom again finds himself sidetracked, this time by an alluring surfer. Still trying to catch up with the ship, Tom gets on another plane, which crashes as well. This latest disaster leaves Tom in Alaska with only the clothes on his back. There, he falls in love with a nurse named Tina, has a mystical experience with a sea monster and learns the truth behind the mishaps that have been dogging him.

As the plot description might indicate, the novel suffers from a lack of continuity, as the narrative veers wildly from one plot point to the next with little connecting the events. The book reads like a patchwork of very different stories, rather than a fast-paced thriller. The writing is marred by clichÃ©s (a flight attendant is “a raven-haired beauty with ruby-red lips,” for example) and flat writing (Native Americans are “people just like us, trying to live on this planet we call Earth”). The more original moments, which include Tom and Mandy urinating in a lake during an intimate moment and a Jordanian refugee whose hat has been permanently glued to his head, seem more ill-advised than inspired.

There are a few witty moments, particularly in Tom’s encounters with a hospital doctor and two police detectives, but they are not enough to compensate for the novel’s flaws.