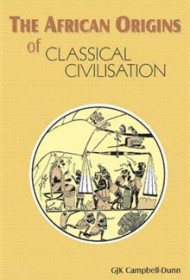 GJK Campbell-Dunn is a retired New Zealand professor of Classics with a special interest in the connection between Africa and early Mediterranean civilization. First published in 2008, The African Origins of Classical Civilisation reflects years of research into the topic.

Although he refers to Martin Bernal only in the preface and bibliography, in many ways Campbell-Dunn’s work parallels Bernal’s widely publicized 1987 work Black Athena. Like Bernal, Campbell-Dunn cites numerous similarities between ancient African culture and early Mediterranean throughout African Origins.

Beginning with the Greek historian Herodotus (484-425 B.C.) as his “guide,” Campbell-Dunn has scoured numerous sources—both archaic and modern—in his search to connect Africa with the beginnings of Western civilization. Pointing to evidence from linguistic similarities to sculpture, utensils, clothing, architecture, and art, he suggests, for instance, that the inhabitants of the Mediterranean island of Crete trace back to the Niger-Congo area of Africa.

Campbell-Dunn has done a lot of research (his bibliography contains two dozen classical sources, along with over 250 contemporary), yet the evidence of African origins for Greek and Roman civilization remains speculative. The author’s linguistic connections seem implausible, or at least not entirely convincing; for instance, he connects the word “maenad” with the Niger-Congo word “mana.” Picking isolated words with somewhat similar sounds does not establish a link. Additionally, support for the thesis is made to appear weightier than it actually is by extraneous material. (Several pages, for example, deal with the masks discovered by Heinrich Schliemann at Mycenae in 1876, without really furthering the book’s argument.)

Connections across the Mediterranean Sea between Africa and ancient Europe do not equate to common origins. Still, despite the book’s shortcomings, those interested in the ongoing debate might wish to weigh for themselves the issues raised in The African Origins of Classical Civilisation.