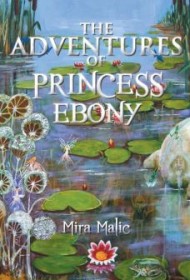 A fanciful story with lovely illustrations, The Adventures of Princess Ebony is a delightful debut that will entertain both children and adults. In a world with fairies, witches, and wizards, Princess Ebony must not only learn how to open her own cursed eyes, but how to help those around her see the beauty in the world.

Princess Ebony was born unable to open her eyes. As much as her father might want her to see, not even a king can get everything he wishes for. Rather than mourn her lack of sight, however, Ebony embraces the world around her. She befriends a fairy, who is drawn to her ability to find the good in misfortune. The fairy tells Ebony that a witch has brought sadness to the edges of the kingdom, and the sensitive princess resolves to help her people.

After Ebony and her father successfully bring laughter to the kingdom’s children, the fairy gifts Ebony with sight. The slighted witch, though, enslaves Ebony. When Ebony learns that the witch is only cruel because people spurned her magical abilities, Ebony convinces her father to spare the witch and invite her to be a royal tutor.

Although the ending could be less abrupt, the story shorter, and some key elements woven in more seamlessly—the witch’s history, for example, could have been alluded to long before its reveal—this story carries an admirable message with a strong heroine and presents a world that feels both tangible and mythical. Gorgeous, textured illustrations bring the story to life (although it is unfortunate that some of them are only a half page, rather than full, and that not every page is paired with an illustration. Some of the images also appear on the page after the complementary text.

Overall, however, this book skillfully brings together themes of resilience, forgiveness, and collaboration. Readers will be happy to know that the author is working on other stories featuring Ebony.