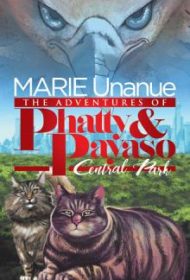 With help from old and new friends, a shy, fearful tabby stops a menacing hawk from committing a crime in Marie Unanue’s middle-grade novel, The Adventures of Phatty & Payaso: Central Park.

“Scaredy-cat” Phatty loves his home with its window view of Central Park. He’s eager to reunite with his best cat friend and neighbor, Payaso, soon to return home from a trip. As Phatty waits, lounging on his chair, a ferocious, sharp-taloned hawk named “Crawler” lands on his terrace and threatens to return to kill him and his friends and steal his owner’s jewelry. That threat is real: Word has it that Crawler escaped from the zoo and was taken in by a thief who trained him to break into peoples’ homes.

When Payaso arrives, Phatty fills him in, and the two cats, along with Phatty’s brother and his human mother’s Maltese, booby-trap the house to capture Crawler. But desperately wanting to prove his bravery, Phatty writes a note to his friends, then sneaks out while they are all napping, determined to find the zookeeper and inform him of Crawler’s whereabouts.  Along the way, Phatty makes new animal friends. Meanwhile, the others set out to help Phatty. The unexpected ending is both silly and touching and begs for a sequel.

Friendship, kindness, and respecting those who are different are important themes here.  However, sometimes the message is overly didactic (for example, one character says to others: “I would be honored to help you. And you’re right – that’s what friends do for each other”). Occasional heavy chit-chatty dialogue slows the action and readers may become impatient for the narrative to move on.

But overall, Unanue’s story is original, full of endearing characters and kid-humor. “Sweet baby buttercream!” and “for the love of good gumbo!” are just two of the characters’ kooky exclamations.

With careful editing, middle-graders will surely devour this and hope for a sequel involving this cast of characters.