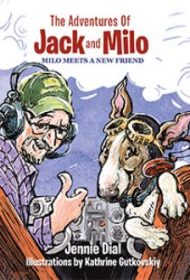 Milo, a bull terrier, and his human owner Jack rescue an abandoned dog in the picture book The Adventures of Jack and Milo: Milo Meets a New Friend.

Pilot Jack and his dog Milo set off in a small plane. Their mission: to pick up a puppy named Gizmo, found roaming near an airport. When the plane lands, they find Gizmo in a cage looking sad, but Gizmo is soon soothed by Milo’s friendliness and by Jack’s offer of a treat. Eventually, they all fly off to a happy ending.

Milo is a joyful, generous dog, and his relationship with Jack, and later, Gizmo, is endearing. Children will enjoy reading about the experience of flying in a small plane, and the writing offers interesting descriptions, such as noting a leaf “dancing with the wind” before landing on sleeping Milo’s head.

Despite their mission, the story provides little urgency or suspense. Although successive paragraphs describe the way Milo’s “heart raced,” “skipped a beat,” and “would jump up and down in his big broad chest,” his excitement never completely translates to readers.

The book ends with Milo, Jack, and Gizmo flying back home, hoping to find Gizmo a “forever family.” While a satisfying resolution, it would have been more effective had the author included specific details or images of Gizmo’s adopted family.

The illustrations are excellent, with vivid colors and a dynamic style that gives a sense of life and motion to every page, even when the only action is a dog’s tail wagging.

In sum, The Adventures of Jack and Milo: Milo Meets a New Friend isn’t perfect, but it should appeal to children fascinated by planes, dogs, or both.