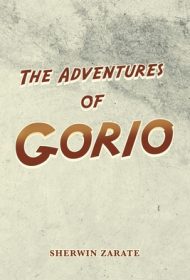 Sherwin Zarate’s The Adventures of Gorio is a fantasy novel focused on a group of teenagers with extraordinary powers.

The story introduces the titular protagonist Gorio. Through first-person narration, Gorio relates how a giant ghost, which he calls a “kapre,” assaults his home in the Philippines. Gorio manages to escape, but not before the monster claims the lives of his family and unalterably upends his life.

Fleeing from the scene, he finds salvation in the form of Matt and Shin Young, a pair from the Archangel Gabriel Academy, a school for students with extraordinary powers located in Yukon, Canada. Matt, 94, but with the appearance of a young man, is an instructor, while Shin Young, 15, is a student who quickly displays her power to teleport across long distances.

Matt and Shin Young recruit Gorio, who soon realizes that his own extraordinary power is the ability to immediately understand and translate any language. His companions explain that the kapre attacked his house in search of a supernatural orb, a talisman partly responsible for Gorio’s unique ability.

Gorio soon finds himself facing off against wendigos, goblins, vampires and other monsters. Along the way, he forges friendships, finds love and challenges the forces of evil.

Zarate’s basic narrative is largely compelling, although Gorio’s enrollment in a school for extraordinary teens summons parallels to X-Men, Harry Potter and other well-known franchises.

The real hurdle is the author’s poor grasp of language. Zarate constantly confuses tenses, writes in fragments and makes punctuation and spelling mistakes. Although the story is told through the perspectives of Gorio and Shin Young in different chapters, the entire text suffers from the same stilted, staccato voice (“The faculty came up with a fight plan. We will have five parts of defence … It was obvious that all of us are nervous”).

While the novel offers some genuinely promising characters, concepts and action, it’s difficult to overcome the writing issues to enjoy the story.