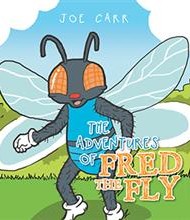 The Adventures of Fred the Fly takes readers through an exciting day in the life of a young fly who, after being injured while out searching for food, must devise a way to evade the local spider and get home safely.

Fred is out exploring when he sees a home’s open window and soon notices an inviting jar of cream inside the house. He goes to inspect the delicacy, but is knocked back by a newspaper-wielding woman. He eventually finds himself in a compost bin, which the woman tosses into the back garden, where a damaged wing forces Fred to spend the night. In the morning, he narrowly evades Sam the garden spider. Eventually, Fred’s two friends—one a snail and one a slug—help him repair his wing and return home.

Sticklers for accuracy will note that web-building spiders do not also hunt for prey on the ground. Also, slugs and snails would probably not be able to repair a fly’s wing with their mucus. Nevertheless, The Adventures of Fred the Fly is a fun story that builds empathy for its main character and will help spark the imaginations of young readers.

The book’s presentation would have benefitted from professional editing, as dense paragraphs and many copyediting errors (including typos, missing and inappropriate punctuation and tense changes) show a lack of polish. The storyline would also benefit from tightening, as repetition and many overly detailed passages cause the pace to drag.

While these issues — particularly the punctuation problems — sometimes present reading and comprehension problems, the plot of The Adventures of Fred the Fly is largely enjoyable and likely to tickle the imaginations of young readers, encouraging them to see their own world in new ways.