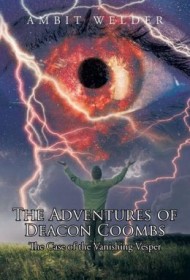 The year is 3533 and the Earth has recently joined the Tetrad Alliance, a coalition of the four star systems in which sentient life exists. But the once-stable Alliance has been shaken by a series of tragedies: Two members of the High Council have met with highly suspicious deaths, and a spaceship has inexplicably disappeared while utilizing Vespering, a technology of interspace travel that was previously thought to be infallible.

Enter Deacon Coombs, a human detective who is known as “one of the greatest sleuthing minds of our times.” Essentially forced to help the Alliance in its search for the mysterious nemesis behind the calamities, Coombs (who rarely leaves his home/sanctuary/fortress) is given a spaceship and two android security guards and is set out into the blackness of deep space on a seemingly hopeless quest. What he ultimately finds is a conspiracy so grand and an entity so evil that even the legendary Coombs may not be able to defeat it.

The story prompts only one (small) criticism: The author’s writing at times loses its tightness and focus. During these sequences, the pacing and overall momentum of the reading experience is negatively affected. But these areas are not frequent and, because of the immersive nature of the storyline, some readers may not even be aware of these writing missteps.