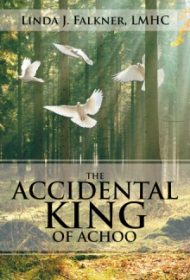 “I deserve to win because I am the best. I have a very good brain.  I will be the greatest king Achoo has ever had. I will make Achoo great again.”  Hmm, sound familiar? Who could author Linda Falkner possibly be modeling the pompous main character on in her disdainful romp, The Accidental King of Achoo?

Sure, she offers the disclaimer that “although this story may parallel many modern-day events, it is no way meant to reflect a real person or real situation.” But readers will quickly conclude otherwise.

The story features an aging, aristocratic blowhard who decides on a whim to compete against more qualified villagers to become king in the mythical land of Achoo (so named because the trees in the nearby forest cause allergies).  Orgizo cheats in a series of competitions, horrifying some, delighting others as he systematically vanquishes his opponents. The gang’s all here, including an old man with wild hair railing against income inequality.

Ultimately one is left: Mikro, who could become the first female ruler. But Orgizo knows how to work a crowd, promising prosperity and demonizing those who are different.  Chants rise about building a wall. “The formerly peaceful and friendly villagers were now divided,” the author writes as the election looms.

Falkner is a clever writer, crafting a fully developed fable while including familiar elements of the 2016 election. Her point-of-view is clear, from references to tiny hands and tweeting messenger birds to the insults Orgizo spews at his challengers. The downside of inserting so many familiar scenarios is that the story risks becoming tiresome, such as Falkner’s toss-away scene with Mikro’s womanizing husband and his paramour’s stained blue dress. Less is more, even in satire.

For those politically aligned with Falkner, this is a quick, fun read and a soothing rejoinder to the election. For supporters of the 45th president, not so much. But it’s doubtful Falkner expects readership from those ranks anyway. Hashtag fake parable.