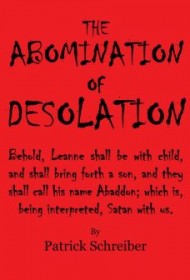 In a work of eschatological exegesis, Patrick Schreiber scrutinizes several scripture passages from the Old and New Testaments—primarily The Book of Daniel, The Gospel of Matthew and Paul’s communications with the Thessalonians—in an effort to unlock the secrets to a centuries-old prophecy that could reveal the name of the “son of Jupiter,” the pagan enemy of mankind whose very existence will usher a divine retaliation in the form of the Second Coming of Christ.

And who is this modern-day anti-Christ? None other than President Barack Obama.

Obviously, the president’s name doesn’t appear directly in the Bible, but the author does some etymological examination and maneuvering to come to his attention-grabbing hypothesis.

There are major problems deciphering all this. “This is not the easiest book to read,” writes Schreiber, “but please don’t blame me for that.” Yet, readers have the right to point fingers if a book isn’t clear. It’s not that the topic isn’t riveting for those interested in eschatological theology, it’s that Schreiber doesn’t provide a clear road map of his intent. There is no “This book is about…” sentence or paragraph to set the course. Instead we’re led along, rudderless at times, trying to understand the author’s points. Since some of the biblical writings expounded on here can be difficult, a learned author—and Schreiber is intelligent— needs to take that into consideration and carefully lead readers through the exposition.

On a more surface level, the layout of the book is distracting. The author uses gray, yellow and red highlights throughout that make for uneasy reading.

In the end, it’s not the theology and history that’s difficult to understand, it’s the author’s particular approach to his material. The result is a book that will present numerous challenges to even the most dedicated reader.