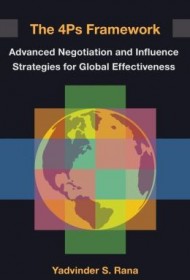 The overwhelming majority of textbooks in classroom use on the subject of negotiation strategies—most of which are used in upper-level management and law classes—center their messages around the use of effective communication strategies. Interpersonal, group, and didactic communication are at the core of these texts.

Not so the new entry from Yadvinder S. Rana, which, as a textbook on advanced negotiation strategies, breaks new ground. While including the requisite chapters on power, decision making, the sender-receiver paradigm, the role of luck, and game theory, and paying the requisite homage to Aristotelean rhetoric—each of which is found in every serious negotiation text—Rana centers his text on the issue of cross-cultural negotiation. He argues that unless managers (his main audience) take into consideration the impact that their negotiating technique has on the culture with which they are doing business, they are doomed to failure.

This is an underlying theme in each chapter, but is best laid-out for the reader in chapters 5 and 13. Here, the author offers a perceptive and convincing discussion of intercultural communication, expanding upon one of his “4P’s”—“Power Perception” (the others are “Preparation,” “Players’ Perspective,” and “Process”)—and discusses how the understanding of the culture of your negotiating partner can be used as a stratagem for negotiating success.

This is a textbook, and it reads like one. It is often dense in its word choice, and the author often reverts to lists of bulleted information. It is also marred by the lack of an index. But The 4Ps Framework is well worth the read, bringing to the table a long overdue multicultural approach to negotiation. It deserves a wide readership and possible course adoption in social science and international studies programs.