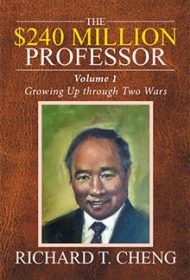 Richard Cheng was three years old when his family fled the Imperial Japanese Army, escaping from Nanjing, China, under cover of darkness in August of 1937. The Chinese capital fell four months later. It was the first of many escapes by the Chengs over the next dozen years, as the war between China and Japan gave way to another, between Chinese Nationalists and the Communist Party. Richard T. Cheng tells the story of his childhood on the run in The $240 Million Professor: Volume 1, Growing Up Through Two Wars.

In most of their escapes, Cheng’s father, a career military officer, stays behind or goes ahead depending on his orders, leaving his wife and three children to make their way with or without military escort. They set off on foot, man-powered litters, ancient buses or overcrowded boats, past the wreckage of crashed trucks and burned or bloated corpses. Bandits are plentiful. Food is not.

Without medicine, both of Richard’s siblings die preventable deaths, one from pneumonia, the other from dysentery. Valuables are stolen, valued possessions jettisoned to lighten the load.

There are moments of real drama, as when the Chengs, elated at having temporarily returned to Nanjing after years of displacement, search for their house and find “only rubble, piles and piles of it.”

Remarkably, despite all, Cheng manages to have a childhood of sorts, and his tale is at its best when he’s being an ordinary kid: fashioning a gun from a stolen curtain rod, scavenging broken parts from a military plane crash, exploring each new location with curiosity and wonderment. Less successful are long passages of stilted dialogue, chronic overuse of modifiers, and overly detailed descriptions that slow the pace. While Cheng’s English is generally good, some may stumble over awkward wording (i.e., “Without exchange any insults, we started push and then punch.”)

Despite such issues, history buffs and readers interested in all things Chinese will appreciate this child’s eye view of growing up in a culturally diverse country ravaged by wars.