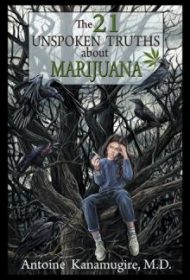 Canadian medical doctor Antoine Kanamugire draws on professional expertise to inform this volume about marijuana (cannabis) and its risks.

This consultant-psychiatrist describes his deep concerns about the use of cannabis, especially as his nation and others move toward legalizing its sale for recreational use. He writes with an eye toward young readers who may be struggling with whether to try marijuana, as well as their parents. Kanamugire emphasizes that the book is not intended to be judgmental. Rather, he sets out to provide truthful information, answering commonly asked questions and including statistics and tables.

The book has a factual tone and cites references (many from medical journals) to back up claims. Topics include effects on the brain, how and why addiction occurs, the “gateway drug” concept, the potential link between the drug and psychosis, and many more.

It’s clear that Kanamugire wants to convince readers to avoid cannabis, and many of the illustrations convey grim scenes of those using drugs. But overall the author’s voice remains calm and informative, and the content doesn’t appear to be sensationalistic or based on “cherry picked” data.

For example, Chapter 17 starts with the question, “Can cannabis literally kill someone?” Kanamugire explains that there is some indirect risk. For example, marijuana smoke might increase the heart rate and, thus, potentially the risk for heart attacks, particularly in those with cardiac histories. But he’s also quick to relay that a marijuana overdose “cannot be considered directly lethal.” Chapter 18 notes a meager 3% increase in car accidents in the US states that have legalized recreational marijuana. The book ends with encouragement and practical advice aimed at people struggling with marijuana addiction, or witnessing it in a loved one.

Despite some scattered minor typographical errors, the author succeeds in providing factual, nonjudgmental information broken down into manageable concepts. The book should serve as a useful resource for readers interested in the topic.