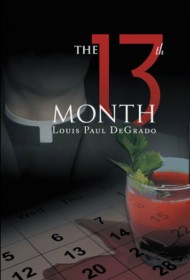 In his page-turning Christian-themed novel, The 13th Month, Louis Paul DeGrado offers a fresh take on the theme of demonic powers among us.

This compelling saga begins with a horrific scene where a teenage boy has murdered his own parents. A diverse team consisting of “a holy man from India, a Native American shaman, a psychiatrist, and a university professor” is at the scene. Their investigation is anything but normal, however, as evidenced by their search for portals, shadows and electronic signals.

The incoherent teenage boy manages to babble only four words before he is whisked away: “Father Frank, save me.” Enter Father Frank Keller, well-loved Catholic priest who has an uncanny power to fight darkness. He soon joins the team in their quest to fight the evil shadows that were in physical form during a period of time, ages past, called the 13th month but that are now hidden in time.

DeGrado explores the nature of evil in a new way: how we attract it by our intent, unintentionally opening portals, and how it can be defeated. His book has a science fiction feel as the team attempts to locate these portals where the evil resides.

Relatable characters in The 13th Month struggle with real issues—the difficulty of quitting smoking, the temptation of a beautiful woman—but use their faith and belief to overcome them. Minor character subplots are wound up with aplomb.

A handful of copyediting issues remain, including: a bag of snack[s] ; “wondering” instead of ”wandering”; “farther and farther” instead of “further and further”; and the overuse of the words “began” and “started.” But these are minor and don’t detract from the story.

With its unusual theme, colorful characters and nail-biting plot, this book is sure to please anyone who appreciates a different take on evil or who loves Christian science fiction.

BlueInk Heads-Up:  The Star designation is given with the recognition that minor copyediting issues remain in need of attention.