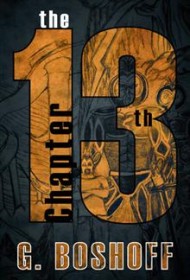 In his book, The 13th Chapter, Graeme Boshoff writes in an apparent fevered state of mind, sharing five recurring nightmares that he cannot shake. Though the book appears to be nonfiction, it’s ultimately unclear whether Boshoff suffers from the nightmares in real life, or whether this short manuscript is meant to be considered a novel.

The dream bothering Boshoff most begins with fish being released either from a bay or from a mountainside. The bay is contiguous to an island, and the mountain is apparently situated on the island. The island is home simultaneously to a modern shopping center and a castle from the Middle Ages. Knights and peasants inhabit the island, presumably coexisting with shopping center patrons who keep the bars and restaurants mentioned by the author financially solvent.

The book goes on to recall other dreams in great detail. Dream 5, for example, begins with the author getting stuck on freeways “spiraling up or down,” and leads into the next part of the dream in which he is in a dark nightclub with music blaring. In the third part of the dream, he wends his way through a cave in which he hears disturbing voices. The dream descriptions are so convoluted (as dreams can be), that translating them in a brief review is challenging at best.

Trouble suggests itself on the first page, labeled “Epilogue.” Epilogues are commonly placed at the end of a book, not the beginning. A look at the mislabeled “Epilogue” here reveals Boshoff’s lack of command of proper grammar and pacing. For example, he writes: “Thousands of community members are on this island and, [sic] them [sic] and the ‘dream guides’ keep on insisting that I must free those fish…”

As a result, the narrative is ultimately baffling. All issues considered, Boshoff’s book might serve as therapy for the demons that haunt him, but it doesn’t work as a piece of prose accessible to general readers.