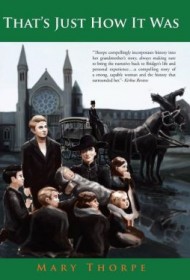 Authors of family memoirs often overload their narratives with minutiae that puts non-family members to sleep. There are no such encumbrances in Mary Thorpe’s biography of her remarkable grandmother, Bridget O’Rourke. Thorpe, a social worker in England, carefully blends Bridget’s story with the events of her day, some of the most pivotal events in Ireland’s history.

O’Rourke was born in 1884 to parents who had grown up during the potato famine, and stories of those days were heard often at home. Her early years were miserable: The poverty-stricken family lived in a hut; food was scarce; and she cared for her sickly parents until they both died when she was 14.

Her life took a turn for the better when she went to work for a well-to-do barrister in Dublin. He recognized her intelligence and helped her further her education. She eventually married, and she and husband Andrew had eight children. Sadly, when Bridget was 36, Andrew died, leaving her with seven children under 14. Yet, this spirited woman pushed on, growing vegetables, raising chickens and pigs and finding work to support her kids.

A parallel narrative deals with the birth of Ireland itself. Bridget saw first-hand the fight for independence – there was one gun battle outside her home — as well as the poverty and crime of everyday life. Thorpe does a nice job detailing Bridget’s life amid that backdrop.

The author is more storyteller than highly polished writer. There are occasional grammatical errors (“I own her a debt”) and missing quotation marks, and she mentions places and events that readers will likely be unfamiliar with, such as Bridget “walking all the way up to the Boghall Road.” More explanation would have helped.

Thorpe ends her memoir in 1936, leaving readers curious about her grandmother’s fate. That’s a story for another time, Thorpe says. If she can clean up the technical issues in her writing, readers will hope that’s a promise.