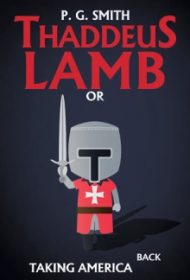 In a novel best categorized as historical fiction, P.G. Smith takes readers through the evolution of Republicans as the party of God.

Amid the aftermath of Watergate, right-wing conservatives are unhappy with GOP’s moderate platforms. Among them is Roger Wright, a successful political strategist who knows how to leverage the power of marketing and wants a truly conservative party back.

Meanwhile, Rev. Thaddeus Lamb, a small-town Ohio minister, is watching what he views as the country’s moral decay: equal rights for minorities, Vietnam War protests and Catch-22 in school libraries. As television usurps radio as the major form of entertainment and evangelical ministers move their ministries to the small screen, Lamb builds a grand cathedral from which to televise his ministry and reach the masses before the country becomes a nation of heathens.

National events, including the 1976 presidential election, set these two characters on a crash course that will ultimately change the face of U.S. politics for decades to come.

Thaddeus Lamb has a potentially engaging and exceptionally timely concept. Its parallels to the current state of American politics are uncanny, especially a belief in the good old days, reinforcing the idea that political movements recycle.

However, at 619 pages, the novel requires editing to minimize excessive detail and a surfeit of characters that do little to advance the plot—for example, the nearly half-page description of a “sparsely furnished,” tiny living room in a scene that could arguably be removed altogether. Likewise, the troubled juvenile visiting this room could have easily been eliminated or combined with other characters to accomplish the same plot goals.

Editing is also needed to correct inconsistent punctuation—especially comma and em dash usage—as well as the use of outdated styles, such as italicizing alma mater and spelling Vietnam as two words.

Despite its promising conceit, the book ultimately falters. Readers not consumed with a passion for American politics will likely lose interest before the story’s end.