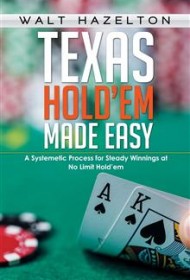 The baffling array of “winning poker” books on the market—more than 400 of them and counting—could drive a person to . . . chess. But the game grows ever more popular thanks to big money tournaments, widespread Internet play and all those celebrity poker-faces on ESPN. So there’s probably an open seat at the table for one more sharp strategist.

Walt Hazelton, who has been playing in online poker tournaments for 15 years, focuses here on Texas Hold’em (the TV glamour game featuring two hole cards for each player and five more, dealt face-up, for all to use). His “relatively simple” advice commands attention because it’s modeled on the classic point-count system the legendary Charles Goren developed for bridge. It’s “a conservative approach to the game that allows a player to steadily grow their chip stack,” Hazelton writes. In essence, the author believes most inexperienced players tend to overvalue (and over-bet) relatively weak hands, particularly “weak-ace” hands, an approach that quickly empties the wallets of these sunny optimists.

Hazelton’s point-counts of hole cards (example: ace-deuce is worth 15 points; a coveted pair of pocket aces, 60 points) determine the crucial decision whether to continue playing any hand or “muck” it, and his lucid strategy proceeds from there. This eliminates the need, he says, to memorize the complex tables of probability that dominate many other poker books. He reinforces his text with well-written chapters on bluffing, folding, trapping opponents when you’re strong, chip management and other touchstones of the game.

For any semi-serious player hoping to win 20 bucks from friends at the dinner-table, or a couple of million under the TV lights in Las Vegas, Texas Hold’em Made Easy is a welcome addition to the classics of the genre written by masters of the art—guys like Dan Harrington, Lee Jones, David Sklansky and Gus Hansen. Because you can never have too many bullets in the gun.