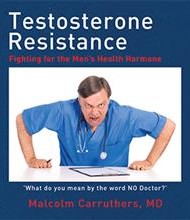 The medical community’s ongoing controversy regarding the misunderstood effects of testosterone on the health of older males is the subject of this detailed, well-explained book.

Malcolm Carruthers, a men’s health specialist and authority on testosterone deficiency, has a long list of published papers and medical roles in the field. Extensive research has led him to conclude that many men with serious medical conditions, including heart and circulatory disorders, obesity and diabetes, can benefit from testosterone replacement therapy (TRT). However, many medical professionals deny such treatments to men, based solely on blood tests that fail to show low testosterone. Carruthers has found that men whose testosterone levels measure as normal actually have testosterone resistance, comparable to insulin resistance in diabetics, and TRT can improve their health issues.

Over the years, testosterone therapy was suspected of leading to prostate cancer and heart disease. However, scientific evidence has since disproven those claims and Carruthers’ studies show TRT can safely and effectively improve men’s body strength, vitality and energy without harm.

The author targets both lay and professional readers with this book, and his information is well-organized and clearly presented. Charts, figures and a host of references enhance the data.
At times, the discussion can be highly academic, which the author recognizes can be tough-going for lay readers. At the start of Chapter Three, which presents full medical evidence for testosterone resistance, the author says the chapter “can be skipped if the reader is willing to accept that there is plenty of scientific evidence. . .”

Despite the largely serious approach, Carruthers occasionally offers a snarky remark regarding TRT naysayers; for example, “They resemble the regenerating life of vampires, who have to be nailed to the ground with a crucifix of a definitive rebuttal in a leading journal article.”

Overall, this is an informative, well-documented book that sheds fresh light on TRT. Despite the technical passages mentioned, it is likely to attract the interest of physicians and patients alike.