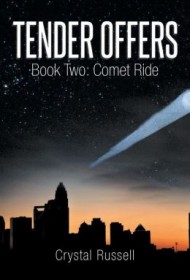 In Comet Ride, book two of the Tender Offers series, business attorney Crystal Russell plumbs the depths of her profession to portray the spectacular fall of a titanic international cosmetic company.

While a sequel, this book offers enough background to allow it to stand alone. Together, the books form a sprawling drama about the manipulation of the legal system, greed-driven commerce, and the monetization of glamour, punctuated with enough soap operatic drama to give Dynasty a run for its money.

Our entrée into this snake pit is Brittany Miles, a beautiful and brilliant attorney who has taken a job as general counsel for the Beverly Hills-based Stanford Wentz Company, the world’s largest cosmetics purveyor. Stanford Wentz, the public face of the company, is a dim but handsome ex-actor dogged by rumors that he murdered his companion. Aaron Rose, the company’s viciously ambitious CEO (in the vein of Gordon Gekko), will stop at nothing to gain more power. As the book unfolds, various characters struggle for control of the international market.

While the scenarios and strategic maneuvering that drive the narrative are imaginative, a surfeit of ponderous exposition about complex legal and business tactics weighs down the novel’s momentum, as do plotlines that seem to go nowhere; for example, in Colombia, Rose conspires with a drug kingpin to smuggle cocaine in perfume bottles in a byzantine plan that never fully resolves itself.

Russell hits most of the formula elements found in the novels of authors such as Christopher Reich or Steve Martini, but the story is too unwieldy and complicated to coalesce properly. And its cartoonish villains, scheming wives, empty glamour and bottomless vanity make the novel seem like an artifact from another decade.

In short, it’s a thriller that, while ambitious, feels both dense and dated. Readers who are compelled by the notion of using the law as open warfare may find a few thrills here, but it’s a heavy commitment to make for the reward.