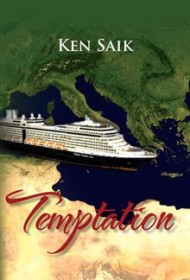 In the slow dance of seduction, the fun comes in the push-pull between desire and resistance. Such is the tension built into Ken Saik’s aptly named novella,Temptation.

Set on a cruise ship in the Mediterranean, the tale unfolds as Ashley Norris, who fled an abusive marriage, finds herself drawn to the attention of Randy Watson, a handsome, athletic shipmate who is as charming as he is persistent. His pursuit awakens a sleeping taste for the thrill of romance – something she has tried to avoid after her divorce. She thought she had found safety in her predictable and patient accountant boyfriend back home. But now she’s not sure safety is what she really wants.

There is great potential in Temptation for a well-crafted romantic intrigue. Who hasn’t found themselves in Ashley’s shoes, torn between the safe and the seductive? And, Saik does a good job in setting up the angst of indecision. An especially riveting scene is one in which Ashley is accidentally pinned against a wall by Randy and flashes back to the horror and surprise when her ex-husband hit her for the first time. It is a gripping moment.

But such early promise is not sustained. Saik devotes an unfortunate amount of the already slim book to chronicling superfluous details of cruise life, such as dinner menus and chatter between characters unrelated to the plot. By doing so, the building urgency between the would-be lovers is stalled.

A bigger problem, though, is the lack of development of the two major characters – especially Ashley’s suitor. There is no sense of who he is. Maybe he represents that anonymous stranger looking for a one-time fling. If so, readers would have to understand Ashley’s temptation more. As written, they only see her caution, which ultimately grows tiresome.

Sadly, in the end, Temptation fails to tempt.