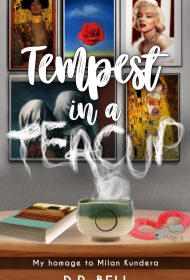 D.R. Bell’s Tempest in a Teacup is a work of literary fiction exploring the tangled relationships between women and men.

Morris is a widower who inherited his late wife’s love of Leonard Cohen. He has retired from the film industry to write novels, channeling his romantic encounters in his writing as Cohen did with song. His ex-girlfriend, Helen, still stinging from their breakup a year before, orchestrates a seemingly random reunion to find closure, only to discover they never knew each other as well as they thought.

But Helen isn’t the only woman interested in Morris. Hana is a professional tennis player trapped in a micromanaged life and a passionless marriage to Lucien, a film executive and chronic womanizer. After a chance encounter with Morris, Hana becomes irrationally obsessed with him. Meanwhile, Lucien plots against his boss Aaron, and sets his sights on Aaron’s emotionally wounded ex-girlfriend.

Fundamentally, Tempest in a Teacup is a series of character studies that comprise a meditation on romance. It’s told in Rashomon-style vignettes with alternating viewpoints between the six main characters, but punctuated with humorous academic digressions on romantic love. In a series of events revolving around a film company retreat, the characters’ lives entwine. Hearts are broken and mended, possibilities explored, beliefs challenged, and misdeeds avenged.

Bell is a talented writer, who considers Tempest an homage to Milan Kundera. His narrative offers a blend of existentialism and psychoanalysis, in which he frequently explains the subconscious of the characters when their own motivations or attractions are obscure to them.

While Tempest explores mid-life crises and other themes common to literary fiction, however, it doesn’t hit every note: The characters sometimes sound less like people than mouthpieces for the author’s ideas, and the ending lacks resonance.

As a story, Tempest is often more academic than engrossing. But Bell’s characters are genuinely enjoyable, and the themes—love, art, passion, destiny—are thoughtfully and provocatively explored in a work that offers many rewards.