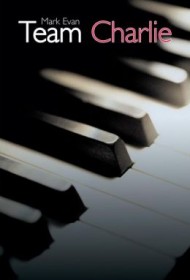 The protagonist of this well-plotted novel is one Charlie Davis, a divorced former insurance salesman who can play pretty fair cocktail-lounge piano when he sets his mind to it. Problem is, Charlie’s mind is also inhabited by a cacophony of unruly voices: a bossy cynic called Bob; a former high school sweetheart, Janie, who stirs up guilt in him; a pious minister who counsels Charlie on theology; a devious shrink who rattles his brain waves — even a fugitive 18th century pirate named Captain Patch.

“You’re like a fly with its compound eye—you see the world from multiple different perspectives.” So declares Charlie’s embattled voice of reason, whose name is Pluto.

Author Mark Evan never uses the word “schizophrenia” in his text, but that hallucinatory torment is precisely what his book is all about—as are A Beautiful Mind, This Much I Know is True and John Wray’s underappreciated Lowboy. Because the writing here is often clumsy and flat (“he . . . came upon a not so particularly nice area of downtown Los Angeles”) and overstocked with clichés, dropped hot potatoes and carts before horses, Team Charlie doesn’t match up to those novels. But Evan finds tenderness, irony and sly wit in Charlie’s troubled journey from his stern aunt’s living room to a piano gig in a shady cigar bar, down into the gutter and back up again, and that makes the whole trip worthwhile. It turns out that the poor guy’s internal voices serve as unlikely friends and demons, and in the end that touchingly endangers his future.

This is Evan’s fourth book (last year he published Lucky Me, a memoir/journal set in the world of sports gambling), and what obsesses him seems to be human delusion—whether it arises in religious fervor, gambling fever, career ambition or psychotic fantasy. Great subject. Now he needs to focus more on his prose to bring it all to life.