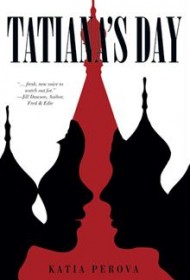 A shy, studious young woman is swept into an unexpected relationship with a charismatic, yet mysterious older man who leads her into a confusing and uncertain future in Katia Perova’s Tatiana’s Day.

The story opens in Moscow on January 25, 1990—known to Russians as Tatiana’s Day, which celebrates the patron saint of students. Protagonist Tatiana also is named after the heroine from a doomed love story written in verse by Alexander Pushkin.

Tatiana is surprised when she’s invited to a party that day by charming Oleg, who is the constant center of attention at the university she attends. Oleg quickly wins her over and in short order they marry. But Tatiana soon realizes Oleg is a complex and ambitious man bent on building wealth and hiding personal situations, which threatens their relationship as she loses her trust in him.

Perova, a Moscow native who now lives in England, studied Russian literature and English translation, and her knowledge shows in the fine details her novel includes. The writing is crisp, offering well-rounded characters and descriptive, lively prose.  Of a nervous initial encounter with Oleg in which Tatiana is soon put at ease, the author writes:  “And as if a tightly strung guitar string broke inside her with a loud ping, Tatiana suddenly felt herself relax.”

Alas, the book’s thinly developed plot overshadows such highlights. It struggles like a tightly tethered hot air balloon that can’t lift from the ground. Throughout, while we see Tatiana continually wary of Oleg’s ways, she does little to take action until the book’s final pages, and the narrative lags as a result.

Overall, Tatiana’s Day has promise, but its storyline lacks the power and complexity to keep it afloat. While many readers will appreciate the author’s engaging writing style, they will finish the book disappointed that the plot is not equally accomplished.