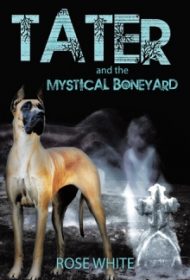 In Rose White’s book for teen readers, 12-year-old Jenny discovers her ability to help the spirits of unloved animals pass into the next life and develops a passion for animal rights.

After writing a school report on the American Society for the Prevention of Cruelty to Animals, Jenny Brown becomes a passionate advocate for animal rights. She meets Cletis, who maintains a “boneyard,” or animal cemetery, and learns that they share an ability to see the spirits of deceased animals and people who have not crossed into the next realm. Cletis tells her animals can only “pass over if they felt any kindness and love from humans…”

Tater and the Mystical Boneyard attempts to shock and horrify through details of a horse being beaten, dogs neglected, and animals euthanized. The message of cruelty prevention is obscured by the violence that exists between nearly every human character. For example, Jenny’s stepmother almost breaks a man’s finger in rage; a neighbor shoots his gun at the children when they feed his neglected dogs; and a female classmate of Jenny’s retaliates against a 16-year-old male bully by “grabbing him underneath the desk” until he screams.

White includes an educational element through brief informational sidebars about various dog breeds (and one about cats). While these can be interesting, they feel misplaced in a novel. The text also requires extensive copyediting and proofing. Within one page, for example, a single character’s name is spelled three different ways: as “More,” “Moore” and “Morris.”

White’s anti-cruelty message is noble. But unsympathetic characters and an unpolished, presentation will likely diminish the appeal of Tater and the Mystical Boneyard.