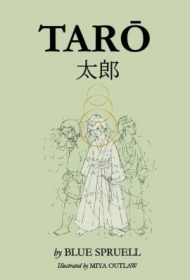 Blue Spruell offers a whimsical and intimate interpretation of ancient Japanese myth in Tarō, a fantasy that melds disparate classic tales into one grand story of adventure, identity and revenge.

Three Japanese folktales inspired this fanciful take on the standard hero’s journey. Protagonist Tarō is heir to a noble family in feudal Japan. Son of Lord and Lady Takeda, young Tarō faces an early existential crisis, pulled between his own tendencies as a thoughtful bookworm and his father’s example as a fierce samurai.

The path of Tarō’s life suddenly shifts after Lord Hashiba (mockingly referred to as Lord Monkey) ambushes Tarō’s family in a bid for power. In her last living act before her murder, Tarō’s mother places her seven-year-old son in a tub and sends him off on the currents of a river.

After the witch Yama Uba recovers the child, he’s reared on her magic, growing up among magical creatures and talking animals. It’s only after he saves the life of Lord Tokugawa, a rival of Lord Monkey, that Tarō finds hints of his true lineage and ultimate destiny. Eventually, he sets off to find his roots, avenge his family, and steer Japan’s political fate.

Spruell reveals a deep knowledge of Japanese culture and history, writing in a flowing style that incorporates the region’s vocabulary, geography and cultural cues. The book offers footnotes with historical facts, and Miya Outlaw’s rich illustrations echo the artistic tradition of medieval Japan. Readers looking for authenticity and careful research will delight in the author’s commitment to detail. And although the book includes some scenes of violence and some dense history, the whimsical tale never loses its sense of wonder and magic.

Those looking for grittier action, or who aren’t keen on reading foreign words and footnotes, may prefer other books. However, for fantasy fans or lovers of Japanese culture who are eager to find a new take on ancient material, Spruell offers much to appreciate.