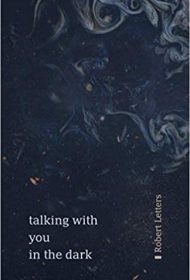 Talking with You in the Dark is a free-verse, lyric poetry collection offering pithy observations and narrative glimpses into a speaker’s relationship with one or many unnamed “you”s.

The poet demonstrates notable facility with language and poetic compression. For instance, this stanza shares a scene that ignites readers’ imaginations: “Your scan results,/ after an all-night wait that included/ spilled coffee on both trouser legs,/ provided no incentive/ to carry on with the treatment.” In another vivid glimpse of a moment in time, the poet writes: “The driver in your black bulletproof limousine/ hit a dissonant note when he complained/ about the interference penalty that wasn’t/ called late in the fourth quarter./ But then he asked you to love your enemy.”

Some of Letters’ quintains, however, are less successful. For instance, “You always were the defiant one/ never afraid to play the role of odd one out./ Never worried about being the one/ they tried to split off from the herd…” Rather than sensory and narrative detail, this example relies on exposition and clichés (“odd one out,” “split off from the herd”).

The collection’s main issue is that the poems don’t work together as a sequence that gains meaning by accretion. While the section heads imply the book is a progression (“first” through “final”) that might lead to a culminating insight or event, this doesn’t occur; the speaker’s observations feel random rather than connected to the whole. And because the “you” referred to by the speaker lacks recurring, distinctive characteristics, it’s difficult to know if it’s the same “you” throughout.