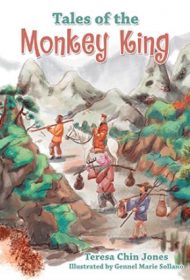 Set in a world depicted throughout Chinese mythology, Tales of the Monkey King spins the author’s version of stories she was told as a child—of a clever, strong-headed monkey with magical powers and his many adventures.

This book is presented in chapters, most only two or three pages long. In them, Monkey King gathers a band of characters to help him bring sacred texts from India to China. Each chapter reads as a self-contained story. This aids in bedtime reading, and could allow families to jump between stories to suit a particular mood.

For example, in Chapter 2, Monkey King learns his powers in secret from Great Sage, but shows off to other students and is banished. In Chapter 17, Monkey King and his companions come across a massive home in the woods and are offered the chance to choose brides among three beautiful sisters; the adventurers have taken monks’ vows, but one is tempted, becomes physically ensnared, and must seek help and forgiveness. And so the journey continues until the group achieves their overarching quest in Chapter 45.

The most challenging part of Tales of the Monkey King is its advanced diction (“disintegrating,” “reconnoiter”). While this evokes the quality of ancient tales, each page tends to have at least one or two words an adult may need to explain. The text is single spaced and full page, which may be overwhelming for younger readers.

The illustrations in Tales of the Monkey King are colorful, evocative, and a strong fit for the tone of these stories, but there are few illustrations in the book, and the majority are quarter-page sized at the beginning of each tale. Additional, larger images would have helped draw in readers.

That said, these are well written, compelling stories. They will enchant young readers who can navigate the sophisticated vocabulary.