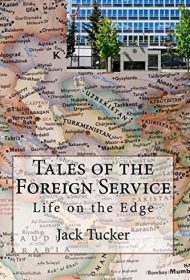 This collection of nine tales, described by the author as fiction but based on true events, chronicles the life and times of a foreign service employee.

Many of these stories share themes of betrayal, often involving adultery and frequently leading to dire consequences, including murder and suicide. Each is related against the backdrop of a foreign setting and various world events.

In the opening story, “Wheels of Justice,” the narrator, Jack, returns to El Salvador where he had been stationed during the tumultuous 1980s. After a poker game with an intriguing socialite, Jack soon learns the truth about her less-than-stellar past. In “Dominican Dilemma,” a young Vice Consul and his wife are stalked by a woman and her children until the bitter truth destroys the consul’s marriage. And in “Lost in the Caucasus,” the tale of a young woman’s broken heart ends with several revelations, unexpected, perhaps unlikely, but nonetheless satisfying.

Informed by the author’s obvious knowledge of the world of foreign service, these stories are engaging and generally a pleasure to read. While they share common themes, each is different in its own way and features believable characters that seem likely based on real people. Tucker’s style is natural, his pace varied. While some of the stories tend to read more like slices of life rather than short stories, that doesn’t diminish the reading experience, nor do copyediting issues (occasionally, a word is missing, and in one story, “Don” becomes “Duane”).

All told, Tales of the Foreign Services provides a window into a world unfamiliar to many readers and will likely prove an enjoyable and interesting read to a wide audience.