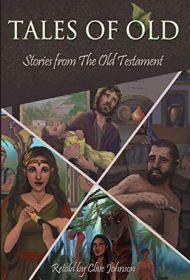 Clive Johnson retells selected stories from the Bible’s Old Testament in this read-aloud compilation for children and adults.

With tales of “giants, fabulous creatures…unworldly beings…maverick prophets…unfathomable miracles and celestial wonders,” the Old Testament has “inspired writers, film makers, painters, composers and many more over the centuries.” Johnson encourages a revival of the oral tradition of storytelling in this modern rewrite of the ancient scriptures.

Using simple language and vivid imagery Johnson presents characters like Adam and Eve, Noah, Samson, Esther, Daniel, Jonah and more, including perspectives on each story’s meaning or lesson. For example, after the tale of creation, Johnson reminds us that since God established a holy day of rest, “we need not work every day, but should have time for rest” and, for Johnson, the story of Abraham reminds us that “God always keeps His promises.” These brief reflections illuminate the modern relevance of these ancient writings, proving, as the author notes, that “they are as fresh and meaningful today as they have always been.”

Johnson frequently adds details never explicitly relayed in the Bible. For example, in his version, God floods the earth because “He would not allow Noah to be laughed at any more,” and Sarai’s jealousy of Hagar is depicted by her “pulling [Hagar’s] hair, calling her names, and making her do all sorts of terrible jobs.” Some readers may not appreciate such embellishment, and scripture references throughout the work would have been helpful for readers to quickly check Johnson’s version against the original. Additionally, while Johnson’s wording is mostly geared toward “children from around the age of five years and up,” the absence of illustrations is likely to hinder the book’s success with this target audience.

Johnson’s Tales of Old provides a nice overview of the Old Testament, in language suitable for young children. Readers should be aware, however, that that the author’s artistic license skews some elements of the original texts.

Also available as an ebook and audiobook.