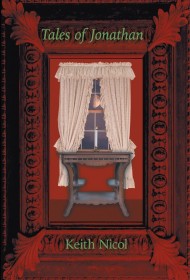 Paul Garner is a flighty schoolboy who is falling in love with his classmate. Bethany is mysterious, shy to everyone but him, and their romance epitomizes adolescent love – innocent, sincere, and intense. No less intense is Paul’s heartbreak when Bethany succumbs to a terrible disease.

Such is the set-up of Tales of Jonathan, a story that becomes much more than a simple look at love and loss as the plot unwinds.

Grief-stricken and searching for meaning after Bethany’s death, Paul is given an unusual assignment by his English professor: finish a play that Bethany was writing. Here, the novel takes an unusual turn as Paul loses himself in the play and his characters evolve into autonomous agents. One such character explains it this way: “When a story ends it does not die…if you direct the narrative to no end, it is no longer a story: it has become your reality.”

And so the play loses its original direction, and Paul’s surrogate character seeks out Bethany’s in a series of romantically charged reunions. It is repetitive, and that seems meaningful – like some Nietzschean eternal recurrence.

Tales of Jonathan is similar to the absurdist fiction that has been growing in popularity in Britain (think Magnus Mills). Keith Nicol might have done better to incorporate the irony and deadpan humor often featured in this genre. Without it, the rabbit hole device of the play becomes less provocative, veering more toward bland metafiction.

There is a certain charm to Nicol’s prose, and he captures difficult emotions (grief, awe, adoration) with notable skill. But even Paul’s surrogate notices the difficulty of a love story in which the object of affection may not be real: “Is my companion my own creation? …a false hope on this long journey? …when did this story begin?” In the end, the answers to these, and other questions, may be no less clear to the reader than the narrator.