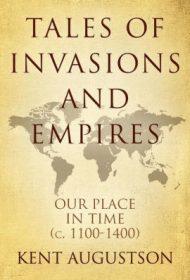 Author Kent Augustson endeavors to present a coherent account of world history and the interconnections of global events in his bold undertaking, Tales of Invasions and Empires.

The book follows Our Axial Age, in which he first presented his hypothesis about the interconnection of world history. This volume concerns the 12th- to 14th centuries as Augustson charts chronological events initiated in parallel in four civilizations across Eurasia, including the histories of Confucian China, Hindu India, the Muslim Middle East, and the Christian West. Throughout, he examines hot button historical accounts, such as intrigues in French and English royal succession, the rise of Chinese dynasties, and the upsurge of Islam in India, among others.

The author delivers the consecutive accounts at breakneck pace and sweeps through the chronicles of historical heavyweights, including Genghis Khan, Eleanor of Aquitaine, Turkic Osman, and poet Dante Alighieri. He also summarizes connections, and how they affect today’s world. For example, he posits that Genghis Khan’s exploits brought the continent of Eurasia into an era of self-awareness, contributed to eventual cross-cultural exchanges, and promoted the growth of trade routes.

The author begins his narrative in a docu-fiction style, in an effort, he says, to achieve an engaging tone. For example, in chapter one, he inserts himself into a palace garden to describe the meeting of Countess Matilda “with her youthful intensity” with monk Hildebrand and his “mature placidity.” Often, Augustson intersperses colorful adjectives that also reflect his opinions, which may frustrate those who prefer to formulate their own judgements.

Additionally, while the author provides a robust bibliography, he doesn’t refer specific quotes and references back to these texts. The book also relies on passive rather than active voice, and paragraphs often are long strings of dependent clauses, making for somewhat challenging reading.

Those who enjoy new approaches to how humanity interconnects may appreciate this work, since it poses intriguing questions. Sticklers for precision in details and presentation, however, would best choose another source.