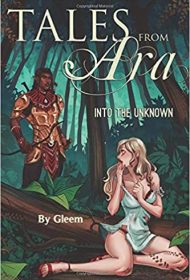 When 19-year-old Harlette is sucked through a mirror in her bedroom, wearing only underwear, a bathrobe, and stiletto heels, she finds herself in a forest, attacked by giant ants. Harlette is saved by a praying mantis, but a group of elves appears, led by King Karayan, who kills the mantis. Harlette feels at odds with Karayan, even as they begin a turbulent relationship; while drawn to each other physically, they are mutually wary. Can Harlette trust Karayan—and how will he react when he discovers he’s become the inspiration for her next romance novel, The Glistening Elf?

The novel is action-packed. Hapless Harlette and Karayan lurch from one emergency to another, encountering fantastical characters, including Harlette’s talking cat, Bernard, and an enormous talking hen and self-described sex educator named Goldie. Tension between Harlette and Karayan provides humorous dialogue as his arrogance fires up brave, if foolish, Harlette. Ara’s complex world—with tribal feuds, historical tension with humans, a shadow queen who threatens everyone and connections to Earth—is imaginatively conceived, and vividly described.

However, those descriptions often feel repetitive. The story is further slowed by overwriting and over-explaining, such as: “Harlette blushed scarlet, bit her lips, fiddled with her sleeve, and looked away, pretending that her interest was situated elsewhere. Yet Harlette’s eyes were drawn to meet Karayan’s, and despite having her sight foggy with embarrassment, she could sense the stealthy smile on his lips.”

The story’s tone is also uneven. Often the writing is old-fashioned; for example, of Karayan, the authors write: “his skin, unblemished by time, sweltered not.” Other times, modern slang creeps in: “Harlette realized she had behaved like an absolute nutter.”

While the flaws significantly impact reader enjoyment, fantasy fans will enjoy the humor and imaginative world-building, as well as the promise of romance between the two protagonists.