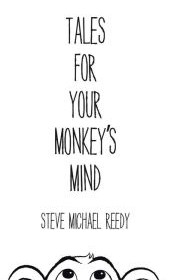 Steve Michael Reedy’s book for “monkeys of all ages” is a collection of six, pleasingly quirky allegorical short stories, bookended with opening and closing poems.

The introductory poem sets a playful, adventurous mood as Reedy, Peter Pan-like, urges the young reader, or “little monkey,” to “Take my hand and come with me/ There are so many wonders that we will see… ” This leads to the first story, “The Wallerwood Toy Factory,” in which children eagerly await reaching age 13, when they can finally enter and work in the town’s toy factory. But when a boy sneaks a peak on the eve of his 13th birthday, he learns why parents never talk of their work there.

The ills-of-growing-up theme is also at work in “Clown Town,” in which a girl eager to become a clown finds that it’s not much fun after all. One character’s statement that “Everyone becomes a clown when they get older” can be read as a cautionary note.

In “Angela’s Castles,” a girl worried about death joins the masses in searching for reassurance at impressive castles, only to learn that each has an absurd list of members’ rules. (Some may see this as criticism of organized religion.) The remaining stories explore how manufactured stories trump actual living, extol living in the moment, and show love triumphing over conformity.

Throughout, Reedy often breaks into rhyme within his prose. Sometimes this follows a pattern; other times, the reason is elusive. This can be distracting, but the collection—enhanced by Tom Fee’s illustrations, which are perfectly suited for the book’s tone—ultimately rewards readers with the discovery that the first five stories are neatly linked to the sixth.

Adulthood is presented as a joyless state here, which may give some parents pause. But the young protagonists’ determination to go forward positively—sometimes with insights from adults who defy the norm—give this book appeal for young adolescents with a contemplative turn of mind.