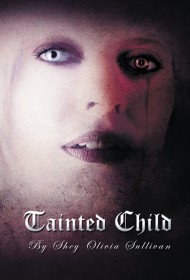 Sixteen-year-old Belladona Arachne has been raised and trained by two guardians — the human called Boss, and the vampire, Shadow —- after her father, the Angel King, was murdered by the daemon known as “the Beast.” Bella is a hybrid creature, half angel and half human. This story reveals what ensues when the Beast, who despises half-breeds, becomes bent on killing her.

Sullivan plunges the reader immediately into a world in which angels, daemons and other creatures have fought a major war, and the daemons seem to have won. The story clips along from crisis to escalating crises, ramping up the danger and surprises, in what is clearly intended to be the first in a series of books.

Unfortunately, not enough is established about the world for the reader to understand the complex hierarchies, mythologies, and relationships at play. It is unclear, for example, what a “Rosser” is (a term used to describe a character), or what powers the various creatures possess. There isn’t a sense of what life is like for the survivors of the war, or what impact the war had on the world itself, other than for Bella. Although it’s obvious the author has a highly developed alternative reality in mind, her vision never makes it onto the page.

This is a difficult read for another reason as well: the text is so riddled with punctuation, spelling, grammar, and vocabulary errors that most sentences need to be deciphered for meaning. Just a few examples of the mistakes that could have been corrected by a copyeditor or proofreader: “terminology” is used for “termination”; “defiant” for “definite”; and “jester” instead of “gesture.”

Sullivan has a strong understanding of conflict and cliffhangers, but without a clearly defined world for readers to comprehend, the effort required to grasp the story will leave her audience frustrated.