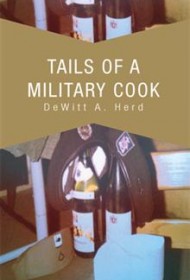 No doubt the life of an Army cook is tough, as Dewitt A. Herd maintains in Tails of a Military Cook. Not only do you have to deal with the usual hardships of being in the service — life on the battlefield, low pay, separation from family and friends, and an itinerant lifestyle — but you never know if you’ll be whipping up dinner for five or 500, or if you’ll have a full kitchen or be forced to make do with a campfire and empty soup can.

Herd spent part of the ‘80s and ‘90s dishing up chow in the Army (the exact timeframe is never clearly stated). In his brief memoir — improperly titled Tails (should be Tales) of a Military Cook — he serves up a few “war” stories and scattered insight into the life of a military cook.

Herd explains the difference between C-Rations, MREs and T-Rations, and the uses of an M-2 burner, M-59 field range and an M-67 immersion heater. He also details how to make a 25-pound ham serve 200 people (turn it into a casserole by adding tomatoes and macaroni); and stresses the importance of knowing how to make a good cup of “joe,” since the military doesn’t function without its coffee.

Herd’s war stories are limited to battling the extreme cold while cooking in a mess tent in remote South Korea; dealing with wild animals such as bucks and boars, and pests such as rats, roaches and flies; and having to step in for another mess team that was accidentally bombarded with “friendly” grenades during a training exercise.

The lack of actual battle stories isn’t the only problem here, though. The stories Herd does share hold limited appeal to the masses, and his writing is littered with grammatical, punctuation and spelling errors, making the book almost illegible at times. This could have been avoided had Herd hired a knowledgeable editor, but as it stands, the book’s many difficult passages will have readers swapping these Tails for a tastier read.