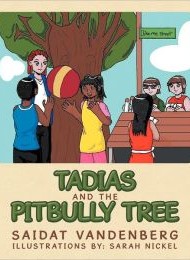 In this children’s picture book, a little girl named Tadias is excited for her journey to “I Like Me Street,” a place where she can be herself and have fun with her friends. But she meets a daunting obstacle on her way there.

Tadias asks her mother for directions to the street and is told to “STOP at the corner. Turn left on THINK Boulevard. Turn right on SPEAK Street. As you walk down Speak Street, you’ll see the place called I Like Me.” With that, Tadias grabs her backpack, kisses her mother goodbye, and sets off.

Tadias does exactly as she’s told. But on her way, she runs into the Pitbully Tree. This is no ordinary tree, but one that yells, throws things and growls: “Hey! I don’t like you. You’ll never get to I Like Me Street. So why don’t you just go home?”

Scared and confused, Tadias runs home and tells her mother what happened. Her mother suggests three magic words she can say to the tree that will make it “shake, quake, and fall down.”

The next time, Tadias steels her courage and confronts the mean tree with the magic words, but the Pitbully Tree doesn’t fall down. Finally, Tadias’ mother and some friends accompany Tadias on the trek. When the grouchy Pitbully Tree again thwarts their path, they shout in unison the three magic words, and suddenly the tree begins to “shake, quake, and wither.”

Because this is a book that promotes anti-bullying and confidence building, a mutual kindheartedness amongst the characters develops by the end. The illustrations are bright and expressive, if lacking artistic finesse, and help bring the story to life. Unfortunately, the message of individual empowerment loses its poignancy when Tadias cannot get to I Like Me Street by herself. While this is an instructive and sweet-tempered story, it would send a clearer message to its young audience with some revision of the plotline.