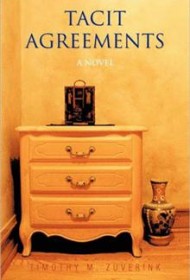 This fascinating, well-written novel tells the story of a young man struggling with his past and family history.

Glenn Ruisdael, heir to a successful, family-run paper manufacturing company, still lives in the small Michigan town in which he grew up, working half-heartedly for the family business and trying to find purpose in his life. When his grandmother dies, he meets with his brother Martin, whom he has not spoken to in years, to examine her stately home and investigate its contents. In the process, the brothers learn about their grandmother’s side of the family, which she never discussed: her father’s leadership of a mysterious, quasi-religious educational institution, her brother’s untimely death, and her courtship with her husband.

Glenn also begins to reconcile with Martin over his feelings of guilt for not taking him in after their parents’ deaths, as well as his belief that Martin disapproved of Glenn being gay. As the brothers grow closer, Glenn remembers his three earlier lovers, all of who taught him about life and relationships.

The novel brilliantly shows the subtle relationship between Glenn and Martin as they resolve the misunderstandings and resentments that have plagued them for years. Glenn’s growing understanding of his family’s history, kept hidden until now by his private yet loving grandparents, gives him insight into his own life.

While one plot strand toward the end of the book involving a secret relative and potentially foul play in the grandmother’s death may seem unnecessarily melodramatic, the rest of the novel is skillfully paced and plotted, showing great control in its gradual revelations. A thoughtful, compelling read, Tacit Agreements wonderfully explores the complexity of family ties and relationships.