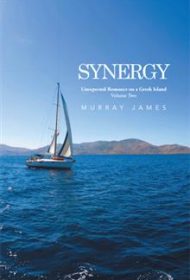 This romantic novel, the second in a projected trilogy, continues the adventures of James and Carlos, an artistic couple who met and fell in love on a Greek island in the earlier novel.

In this installment, the two men travel to Spain and Australia, meeting each other’s family and friends and preparing for their wedding. They also visit London to establish Carlos’ career as a painter and return to their beloved Greek island to move into the new house they have built and begin their life as a married couple.

Author Murray James’ descriptions of the places James and Carlos visit, as well as the many wonderful meals they eat, are all beautifully described, making the settings and food extraordinarily vivid. Additionally, James and Carlos are extremely likeable characters who become good friends with nearly everyone they meet on their travels. It’s enjoyable to spend time with them as they share each other’s pasts and work towards building a future together.

Readers expecting conflict, however, may be disappointed. Perhaps the best way to describe their romance is to use the words James and other characters do: a “fairytale.” Their relationship is nearly perfect; they support each other, agree on nearly everything, and have an incredibly strong bond, both emotionally and physically. Indeed, the novel’s title comes from James’ observation that their individual qualities strengthen and enhance the other’s. Despite some initial concerns, all of James and Carlos’ family and friends get along.

While it is refreshing to find a book where gay characters are accepted and their relationship goes smoothly, at times it feels unrealistic. In addition, the couple tell the story of their courtship to everyone they encounter; with them meeting so many different people, this repetition slows the pace.

Despite such flaws, anyone looking for a stunning travelogue of exotic locations, charming main characters, and a somewhat unconventional romance story will appreciate this novel.