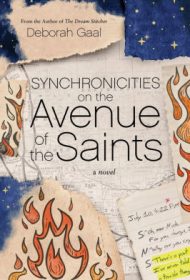 In this novel, author Deborah Gaal explores synchronicity— the idea that seemingly unrelated events may be connected on a deeper level—in our everyday lives.

Diagnosed as bipolar as a child, Noah Friedman has been on a test medication for the last 14 years. His mother Sally owns a pharmaceutical company, but the large corporation Duschene International, interested in reaching more people with Noah’s drug, has offered to buy her out. Not surprisingly, the corporation —and Noah’s psychiatrist, who stands to gain from the sale of the drug —are pressuring Sally to sell.

Meanwhile Noah, a physicist, discovers that his late ancestors are hovering around him. The long-dead Hadassah wants him to right the wrongs of her life in 1918 or suffer the consequences in his life. Is she the result of his increased awareness of another dimension—or a drug-induced side effect?

When Noah uncovers devastating information on the long-term side effects of his medication, he realizes he must stop Duschene—a mission that gains urgency when an African shaman tells him that Duschene ruined an African village with a tainted AIDS drug. With the shaman’s help, Noah accesses the spiritual world to rectify things and find a meaningful life—and love—of his own.

While this is a complicated plot, the author weaves its many elements into her tale skillfully. Gaal uses “magical realism,” where supernatural events seem to be ordinary occurrences, to illustrate how the past affects the present. Such fantastical moments are intriguing and believable, never lapsing into the outrageous.

Gaal is equally skilled at description. For a blizzard scene in Hadassah’s lifetime, she writes: “The road lay buried beneath deep drifts that mimicked the mounds of white flour on her baking board.”

While some elements can feel stereotypical – the evil corporation with the Harvey Weinstein-esque leader, for example—magical realism fans will easily overlook these moments to enjoy the highly entertaining story, one that will leave them alert to synchronicities in their own lives.