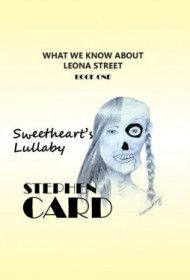 A deeply disturbing story revolving around a traumatized girl whose nightmarish experience living with an alcoholic father literally fractures her into two personalities, Sweetheart’s Lullaby is a psychological horror that takes place in the fictional town of Emily, Maryland, a setting similar to Stephen King’s Castle Rock and H.P. Lovecraft’s Innsmouth that is steeped in dark myth and shadowy secrets.

When Dinah Haffner’s disabled and drunken father inevitably dies in his chair in the living room — a chair he had rarely left in years; he urinated in bottles and defecated in kettles — the psychologically and physically abused woman, now in her 40s, is forced to re-evaluate her twisted existence. After decades of serving her “beast” of a father (“Cigarette, beer, fix TV, rub feet. Cigarette, beer, fix TV, rub feet.”) and being relentlessly abused by him, Dinah’s two warring personalities Â¬– rebellious Dinah and subservient Sweetheart – suddenly see their world turned upside down.

Sweetheart’s Lullaby shows glimpses of dark poetic brilliance (“The place was alive again and infested with invisible scurrying guardians of shame.”), and the overall story is creepily compelling, but a lack of narrative fluidity coupled with numerous grammatical and typographical errors and unhurried pacing make this a difficult read to get into initially.

That said, fans of psychological horror novels by King and Koontz looking for a promising new voice may want to seek out this novel from Card, who, according to a teaser at the end of Sweetheart’s Lullaby, will return to Emily, Maryland, with a novel entitled The Pinch.